Fortunately, the capability to reclaim and reuse completion brines is a core component of TETRA’s oilfield operations. By repurposing previously used fluids, our brine blending and manufacturing operations can maintain the capacity to supply the vast quantities of completion brines that customers require to complete their wells.

One challenge is that many reclamation jobs are not simply a case of taking fluids back to our facilities and immediately having them ready to load out for a new job. Often, returned completion brines are contaminated and not in a suitable condition for future jobs. As a result, we previously had more and more unusable fluids being returned to our brine plants.

While some might think reclamation is as simple as filtering out contaminants from the fluid using traditional filter systems, like a diatomaceous earth filter press system, the reality is that reclamation requires quite a bit more science.

This challenge led the TETRA Innovation Group (TIG) to look for ways to remove the contaminants from these returned fluids so they could be reused rather than just sit in tanks as ‘dead inventory’. So, we initiated a plan of action to challenge the team at the TIG with not only identifying the contaminants, but more crucially, providing the solutions that would allow for reclamation of the dead inventory.

One common contaminant in returned completion brines is a high concentration of dissolved iron. Elevated iron levels in completion brines generally drop the pH of those fluids, turning them more acidic. The acidification of the fluids increases the rate at which the metal tubing and casings that come into contact with the completion brine corrode. This increased corrosion rate then results in more iron being pulled into the completion brine, continuing a vicious cycle.

Another common contaminant in returned completion brines is unbroken polymer. Often, completion brines are made viscous with polymer so that the fluid can either carry solids down into a wellbore or carry solids out of a wellbore. In either case, when the fluid returns from its trip into the well, the polymer used to thicken the fluid has not broken down completely. Fluid in this state cannot be filtered to remove the solids or other contaminants carried out the wellbore. Sometimes, the fluid can be so thick that it cannot be easily pumped, which then leads to other potential operational problems.

The third set of common contaminants in returned completion brines is solids, oil, and other organic matter. These contaminants are commonly encountered when fluids are pushed downhole through the well. Significant quantities of more than 0.5% by volume are enough to cause filtration problems. Slowing the filtration process limits the rate at which the fluid can be repumped down the well, which then slows the whole operation. Moreover, the presence of solids, oil, and organic materials negatively impact the visual appearance of the fluid, imparting turbidity and color.

Case Study 1: A Gulf Above the Competition

From 2013 to 2018, 16,000 barrels of ‘dead’ returned fluid inventory from the Gulf of Mexico were treated by TETRA, along with an additional 20,000 barrels of new returned fluid from subsequent jobs. The value of the 36,000 barrels treated during this span was approximately $10 million. Fully 97% of the volume was recovered as usable inventory, which greatly reduced the manufacturing burden on our brine blending plants. Of the 36,000 barrels treated, 16,000 barrels were fluids belonging to customers. TETRA brine reclamation ended up saving these customers approximately $5 million. Additionally, TETRA’s large brine storage capabilities enable the processing and treatment of enormous volumes of returned fluid, providing exceptional value to customers. 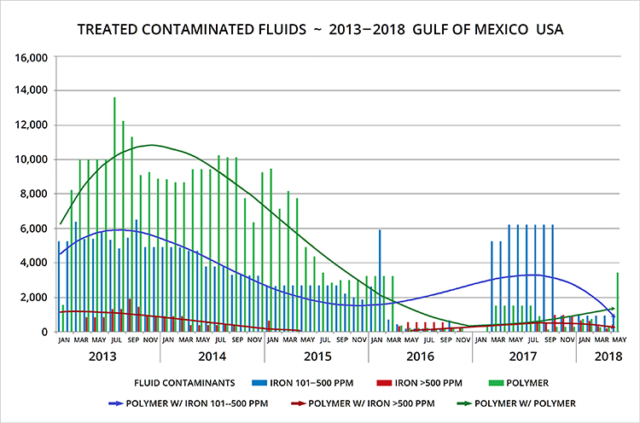 Case Study 2: Beasts of the East

Not to be outdone, TETRA’s Eastern Hemisphere team based in Aberdeen, Scotland, performed over 70 reclamation jobs in the U.K. from 2016 to 2020. These treatments reclaimed nearly 52,000 barrels of fluid, also achieving 97% recovery efficiency. In fact, in 2019 alone more than 14,000 barrels of fluid were treated with 97% efficiency. A major factor in the Company’s success in reclaiming fluids in the Eastern Hemisphere is that our brine storage capabilities Northeast of Scotland are by far the region’s largest, with over 36,000 barrels of storage capacity available across three different locations. This gives TETRA the ability to take on reclamation jobs that our competitors simply can’t undertake.

The role of TETRA specialty chemicals is a key component in our brine reclamation process—without them the amount of fluid recovered during the reclamation process would be significantly less. TETRA’s range of flocculation chemicals includes a highly effective flocculant for facilitating efficient solids removal and extending the life of the DE press. Additionally, TETRA’s oil absorbent filter aid, TETRA O-Lok C, enhances oil removal and is easily incorporated into DE press filtration.

As recently as August 2021, TETRA successfully used TETRA O-Lok C as part of a high-profile reclamation job, receiving 692 barrels of TETRA CS Neptune® high-density monovalent completion brine that analysis showed contained oil and solids. Using a single press package consisting of a 600-squarefoot filter press, a slurry tank, and a twin-vessel cartridge unit dressed with nominal 25 micron and absolute 10-micron cartridges, just one pass removed all traces of oil and solids in the fluid, with over 90% of the fluid reclaimed.

Brine reclamation is smart business, delivering tremendous value to oil and gas operators. Moving forward, TETRA will continue to evaluate returned fluids for reclamation and reuse, while at the same time continuously refining our reclamation techniques, looking for ways to improve the efficiency of removing contaminants and preserving fluids. Collaboration is the key to innovation and a competitive edge. The close collaboration between the TIG and the operations teams in the U.S. and the U.K. has enabled TETRA to build a brine reclamation infrastructure that distinguishes us from competitors in terms of both the volumes of fluid we can reclaim and the quality of the resulting fluids.

Phillip A. Vincent is a Research & Development Advisor for research and development in the TETRA Innovation Group (TIG), based in Conroe, Texas. He joined TETRA in 2013 and helped lead development of the Company’s protocols for completion brine reclamation. He also was instrumental in the development of the TETRA CS Neptune® portfolio of high-density, zinc-free, formate-free completion fluids. Phillip holds a Bachelor of Science in chemical engineering from The University of Texas at Austin.