Around the world, most goods, materials, and foods are moved from points of origin to destinations via conventional roadways, as trains have limited capacity and reach. The United States has some four million miles of roadway that includes paved highways, freeways, toll roads, and city and suburban streets, as well as countless rural roads, many of which are unpaved or non-surfaced. In fact, roughly 35% of US roads are unpaved and traffic on these roads can kick up huge amounts of dust. And whether paved or not, aging roads require regular maintenance and even major repair.

The proliferation of dust is a major problem with unpaved roads, obscuring a clear view of the roadway and traffic, damaging roadside vegetation and nearby crops, and posing a health hazard. The remedy, however, is simple and affordable: TETRA ROADMASTER™ liquid calcium chloride. CaCl2 has been used for decades as a safe, low-cost means of dust control and stabilization on unpaved roads and other surfaces, like gravel parking lots and storage yards. The hygroscopic and deliquescent properties of CaCl2 keep the treated surface moist over a wide range of temperatures and humidities, and moisture inhibits the creation of dust.

TABLE 1 – Minimal temperatures and corresponding relative humidities at which CaCl2 absorbs moisture from the atmosphere.

As Table 1 shows, even when road surface temperatures reach or exceed 100°F (37.7°C) at a relative humidity of 20% — a common occurrence in US Sun Belt states and other subtropical and tropical regions — CaCl2 is still able to absorb moisture from the atmosphere. Likewise, at lower tempera-tures and higher relative humidities, CaCl2 continues to absorb and retain atmospheric moisture, thereby suppressing dust.

The amount of ROADMASTER CaCl2 required for a given dust-control and stabilization application will depend on the particle size distribution of the road aggregate to be treated as well as the environmental conditions of the roadway and region. A typical application entails an aqueous solution of roughly 35% CaCl2 applied to the prepared surface at about 0.35 gallons per square yard, with periodic road maintenance of about .20 gallons per square yard depending on the amount of traffic. High levels of traffic and harsh climates may necessitate complete reapplication of liquid CaCl2 annually or seasonally.

Newly constructed roads and those requiring total replacement can also benefit from the properties of TETRA ROADMASTER CaCl2. The proper density and thus stability of a roadway’s underlying aggregate depends greatly on maintaining an optimal range of moisture. An aggregate with moisture levels outside the optimal range — either too dry due to evaporation or too wet due to heavy precipitation and retention of moisture — loses stability, especially under the strain of traffic.

Treating the road-base aggregate with TETRA ROADMASTER CaCl2, however, will help maintain moisture levels inside the optimal range. The product’s properties, specifically its hygroscopicity and ability to lower the vapor pressure of water, inhibits evaporation and thereby helps maintain the stability and longevity of the treated road base. Moreover, with an appropriate percentage of fine and ultrafine particles, CaCl2 facilitates better compaction of the aggregate, and a denser compaction acts as a barrier to oversaturation from precipitation.

As Table 2 shows, CaCl2 also costs less than other materials used to stabilize road-base aggregate, almost by half compared to the widely used mixture of fly ash and lime (or cement). 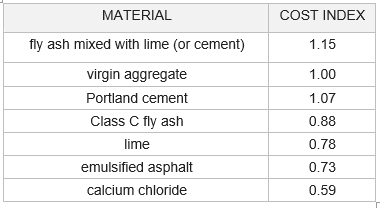 TETRA ROADMASTER CaCl2 is also ideal for use in full-depth reclamation (or recycling), a road rehabilitation technique of increasing use. FDR is a process by which the existing road base is pulverized, moistened, and compacted to re-establish underlying stability for a new surface of chip-seal, asphalt, or concrete. The process is cost-effective and time-saving, as it eliminates the need to haul away old material for disposal and bring in and disperse new aggregate for the road base.

Using CaCl2 in FDR projects is becoming a common practice in the US as a low-cost alternative to multiple applications of water or using additives like lignosulfonates, petroleum resins, and asphalt emulsions, which add to the cost and duration of the repair. Using water, for example, often entails repeated applications to overcome evaporation but which can wash away fine particles essential for stability, thereby compromising the load-bearing strength of the road. Using sticky resins or emulsions greatly magnifies the work as they adhere to truck beds and construction equipment and complicate dispersal, especially when ambient temperatures are high.

Generally, FDR applications entail treating the upper 6–8 inches of aggregate with about 2.4 gallons per square yard of liquid CaCl2 prior to pulverization. This is then followed by a lighter treatment after the road is graded into is final form prior to compaction.

Research conducted under the auspices of Texas A&M University has shown that CaCl2 enhances the cohesive bond of granular materials like soil, fly ash, cement, and lime, thereby adding stability and preventing the generation of dust. The properties that enable such cohesion are the chemical’s hygroscopicity and deliquescence over a broad range of temperatures and humidities, as well as its ability to increase the surface tension of fluids in the voids between particles. This latter action enhances the cohesive bond between particles, yielding a stronger, more stable material for roadbeds. Among the key scientific findings are:

Our team is happy to answer your questions or provide detailed information, please email us here.

Surendra K. Mishra is Manager of Business Development at TETRA Technologies, Inc. He holds a doctorate in mineral process engineering from University of New South Wales in Australia, as well as 13 US patents. He has published numerous papers on calcium chloride, dust control, and industrial waste management.