The Cost of Corrosion

Controlling corrosion in oil and gas operations is a major challenge and too often a costly reality. Though a current estimate is unavailable, the economic cost of corrosion across the industry and worldwide likely runs in the tens of billions of dollars. The oft-cited amount of $1.4 billion originates from the 2002 NACE study, Corrosion Costs and Preventive Strategies in the United States, but that figure is for the U.S. alone and comes from research conducted in 1998.[i] Thus, despite advances in corrosion control over the past two decades, that estimate is likely far too low and certainly not indicative of worldwide costs to the overall industry in 2022.

Beyond the economics, corrosion also entails another cost, that of considerable risks to the safety of personnel and the environment. The failure of a corroded high-pressure valve, for example, can cause serious injury to a worker as well as release flammable or hazardous content.

Like death and taxes, there is an absolute certainty to corrosion: On a long enough timeline, every known material, be it natural or artificial, will eventually corrode, from rocks and woods to plastics and metals, including corrosion-resistant alloys (CRAs). In fact, in many applications, CRAs actually form a protective layer of less-damaging oxide corrosion to hinder the onset of more destructive corrosion.

In the oil and gas industry, the corrosion of metals is the primary concern. Metal corrosion is the leading cause of transmission pipeline failure.[ii] In upstream operations, the most-commonly discussed types of corrosion that afflict production tubing and equipment are:

The presence of water-moisture is the main catalyst for most of these corrosion types. Other factors that contribute to chemical corrosion include reservoir chemistry, downhole pressure, and downhole temperature. The potential for corrosion intensifies in harsher downhole environments, like deepwater HP/HT wells, and in long laterals, where entrained moisture can get trapped at tubular joints and cause crevice cracking.

The Rise and Mitigation of Corrosion

In the early years of the oil boom, corrosion was rarely a limiting factor for the integrity and life of production tubing. Wells tended to be relatively short-lived and shallower with lower bottomhole temperatures than those of today. Back then, when water content reached a critical percentage of overall fluid flow, the operator would often just shut in the well and drill a new one.[iii]

Such a cavalier approach is no longer in vogue, with wells now designed to operate much longer and corrosion control a priority. Several factors have contributed to the recent rise of corrosion in upstream operations, among them: the use of various salts in downhole fluids, deeper and lengthier wellbores, higher volumes of produced water, higher levels of H2S in mature reservoirs, and the use of proppant sand for stimulation.

To mitigate the erosive corrosion caused by sand, operators route production flow through filters, separators, or cyclonic devices—the latter fast becoming the industry standard due to their superior efficiency, reduced maintenance, and smaller footprint. One such device is our patented  TETRA SandStorm™ advanced cyclone technology, which delivers up to 100% efficiency in sand removal from the production stream, without introducing pressure differentials that can hinder production.

To control corrosion associated with water moisture and chemical reaction, specialized additives can be introduced to the wellbore, depending on the type of corrosion. These include innovative corrosion inhibitors, CO2 and H2S scavengers, biocides, and pH stabilizers.

Another measure to mitigate corrosion of production tubing is the use of CRAs, polymer coatings, or fiberglass tubing. But for the high-pressure/high-temperature environments of deepwater and ultra-deepwater applications, the favored choices are martensitic stainless steel and duplex stainless steel alloys. CRA production tubing is more expensive than non-CRA metal tubing, but it is generally effective at controlling corrosion . . . for the most part.

A Puzzling New Form of Corrosion

Around the late 1990s and early 2000s, the increased use of CRAs in deepwater HP/HT wells led to an entirely new kind of corrosive tubing failure. The new phenomenon was dubbed annulus environmentally assisted cracking (AEAC), because in most cases the corrosion originated on the annulus side of the downhole tubing instead of the production side, where, as one would expect, corrosion concerns tend to be focused.[iv]

The growing frequency of AEAC evolved into a rather costly trend, prompting scientists at TETRA Technologies and JFE Steel to form a research consortium called the TETRA ChemiMetallurgy Research Alliance. Leveraging their combined expertise in chemistry and metallurgy, their objective was to determine the cause of AEAC and develop a solution.

As they explain in a 2009 SPE paper, the team determined the dominant cause of AEAC to be not chloride ions and oxygen, as conventional wisdom would have it, but other contaminants in completion and packer fluids, namely “sulfur-containing species, oxidants other than oxygen, and select basic ionic species.”[v] Their research also revealed that completion and packer fluids obtained from different sources have vastly different chemistries, and that the chemistry and corrosivity of fluids in the production space vary markedly from those in the annulus.

The solution entailed, first and foremost, the need for stringent quality assurance of completion and packer fluids as well as best-practice fluid management throughout the lifecycle of the fluids. Second, a means to accurately determine the compatibility between the formation, the well and tubing, and the fluids was needed.

Working toward the second objective, the research alliance led to the development of the TETRA MatchWell® fluid compatibility selector, a propriety software that uses algorithms to match completion and packer fluids with CRAs and well conditions in order to reduce the potential for environmentally assisted cracking of production tubing.

Using MatchWell, TETRA engineers can input the various parameters for the formation, the well and tubing, and the fluids (see Figures 1 and 2). The software then performs analysis and generates a Fluid Recommendation Report (see Figure 3). 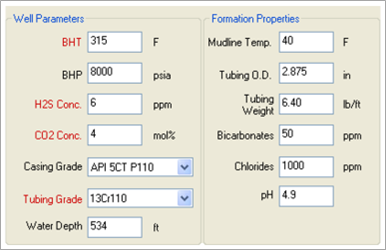 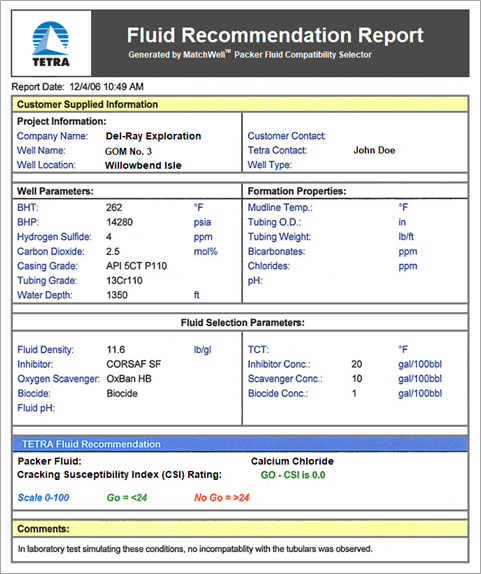 TETRA MatchWell provides an intelligent, holistic approach to well design that includes the critical parameters of fluid-metallurgy interface, helping customers avoid costly corrosion and reduce the HSEQ risks associated with tubing failure. It also serves as a secure database for the well, tubing, fluid, and formation data, enabling account managers to easily access the information and share it with customers.

To date, the TETRA MatchWell software has been used to generate Fluid Recommendation Reports for thousands of wells, enabling the operators to avoid costly corrosion-induced tubing failures like AEAC as well as eliminate the considerable safety and environmental risks associated with corrosion failures.

Joey Detiveaux is Area Manager for USA Offshore Completion Fluids & Services at TETRA Technologies in The Woodlands, Texas. At TETRA for the past 27 years, he has over 46 years of experience in the oil and gas industry, 41 of which have been focused on completion and drilling fluids. Joey holds a B.Sc. in petroleum services technology from Nicholls State University in Louisiana.